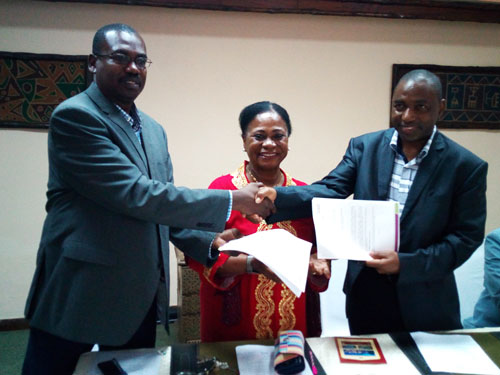 Tanzania Media Foundation (TMF) on 27 October 2017 signed a grant contract valued at Sh167 million to work with Zanzibar Leo Newspaper as part of its content with transformation programme which aims to achieve sustainable investigative journalism in Tanzania. Speaking at the partnership launch event which was held alongside TMF’s quarterly learning session for journalists in Zanzibar, TMF executive director Ernest Sungura noted that this is just one of the organisation’s efforts to strengthen media on the isles as part of its mandate to build media capacity for promoting accountability in Tanzania. TMF previously supported Zanzibar Leo an investigative journalism desk and stories covered by journalists at the paper with support from TMF have had a positive social impact.

“One of the investigative stories published in Zanzibar Leo was on the black market trade in oil. It revealed how this was operated and the impact it was having on the economic development of Zanzibar by denying the Government of Zanzibar tax money that could be used to cover its recurrent and development budget”  said Mr Sungura.

Before inviting Zanzibar’s Minister of Information, Tourism, Culture and Sports, Rashid Ali Juma to officially close the learning session and witness the signing of the agreement between TMF and Zanzibar Leo, the TMF director explained that TMF has in the past had several engagements with media in Zanzibar. It had provided a grant to Tanzania Media Women’s Association (TAMWA) Zanzibar to run a fellowship on gender based violence (GBV) that built the capacity of participants to package programmes that exposed incidences of GBV to the public and authorities, prompting public pressure and reaction.

“Consequently, the authorities took tougher measures to address GBV in Zanzibar. We would like to applaud the Government of Zanzibar for fighting gender based violence to improve the livelihoods of the Zanzibar women,” said Mr Sungura.

He added that TMF had continued it emphasis on promoting gender equality through the media by providing a content grant to Pemba Press Club (PPC) in 2016. The grant increased the quality, quantity and diversity of public interest stories on economic opportunities and challenges facing women in Pemba urban and rural areas. The intervention helped to increase knowledge and challenge stereotypes, prompting women to engage in wealth-creating activities such as small businesses.

In turn, the Minister of Information, Tourism, Culture and Sports, Rashid Ali Juma, expressed his appreciation of TMF efforts to improve the capacity of journalists in Zanzibar.

“I greatly appreciate your efforts to sharpen journalistic skills and increase knowledge, especially in moving journalists towards digital reporting, as this is in line with fast-moving and evolving trends in the media and digital technologies that have led to a radical change in citizen expectations. It will help Zanzibar’s journalists to keep up with the rest of the world in this area,” said the Minister Juma.

He also noted that TMF’s focus on promoting quality local content and increased rural coverage by 80 percent has helped the country’s leadership to address various local issues, promising maximum cooperation from the Government of Zanzibar.