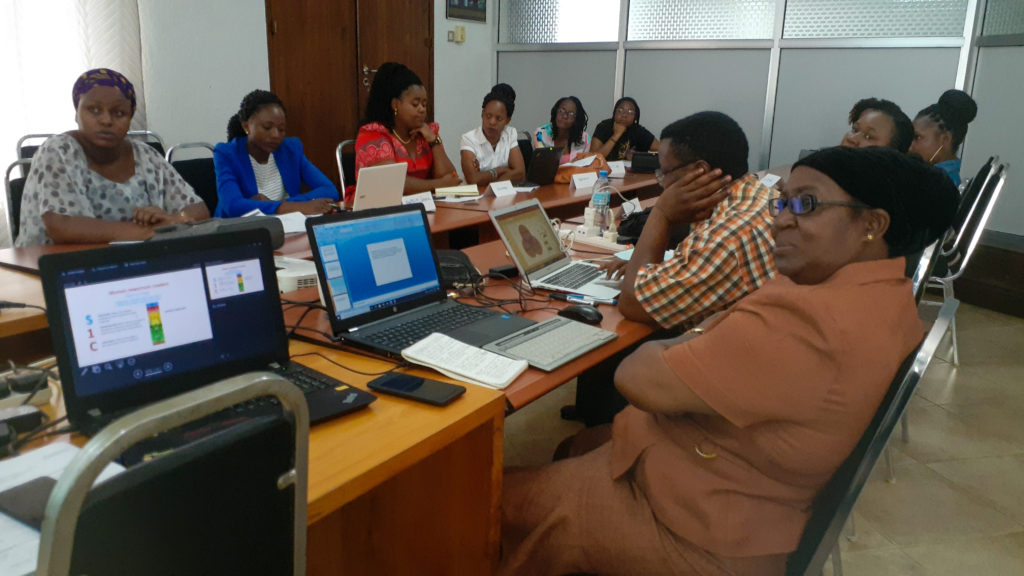 Gender in media discussion during one of the master class one sessions at TMF office on 20th January, 2021

Towards having a transformative impact on gender and inequality in Tanzania through the media, Tanzania Media Foundation (TMF) has secured funding from the Canadian High Commission in Tanzania through Canada Funds for Local Initiatives (CFLI) to build the capacity of 10 female journalists and newsroom leaders to promote gender equality.

The funding will enable TMF to run series of master classes and other tailor-made activities for participants and their media houses from 19th January until 15 February this year. The three master classes will be conducted both physically by meeting at the TMF office in Kinondoni, Dar es Salaam and online. The 10 participants in the programme are all female journalists in leadership in editorial and managerial roles from eight regions in Tanzania; that is, Mara, Kagera, Mwanza, Morogoro, Dodoma, Mbeya, Tabora and Pwani.

At the end of the first master class on 22nd January, journalists expressed their appreciation to TMF, all saying that the first session has been productive.

“This training is very good for us media leaders. As a station manager, I have found that despite some of our media [houses] having a gender policy, it is still not practically practical and there are other important things that are not in our policies.”

She went on to say, “I think there is a need for us who have been trained by TMF to make changes to ensure gender equality in our media [houses] so that even when we are talking about gender issues we have enough understanding.”

Jennipher Adam who is the first female editor at Ushindi FM Radio in Mbeya explains how she has been able to benefit from the first master class.

“It has been such a productive training as I have greatly widened my understanding on gender issues in the media context, which knowledge will be extended to my colleagues as well, who have not been able to receive the training.”

“The project aims to enhance gender equality by building the skills and capacities of 10 women in decision-making roles to be effective advocates for women and girls rights and for gender equality through the media in Tanzania.”

She further explains the reason for TMF engaging only women in this project.

“The programme is designed to focus on women because we want to help build the capacity of the few women in leadership or decision-making roles in media.”

According to a 2019 study by the Media Council of Tanzania (which you can access through https://bit.ly/369Cg5r ), women are still underrepresented at management level in the media sector in Tanzania.

Dastan Kamanzi, TMF’s Programme Specialist, explains how the project will be beneficial to participants and the media sector, broadly.

“The project is expected to lead to generation of a database of 100 story ideas sourced through engagement of women from the regions from which the participants are based.”

“Our key selection criteria was the extent to which an applicant, her media house and the audience are likely to benefit from the programme,” he added.

Dr. Geofrey Chambua, a gender consultant at the Tanzania Gender Networking Programme (TGNP), who led a session exploring gender dimensions in the media, commended TMF for coming up with the initiative and thanked participants for their vibrance during his class.

“Participants demonstrated their high competences and reasons for selection by being very active and vibrant throughout the session. This was evidenced by their questions, the way they shared experiences and case studies and active participation in the session.”

He added that however most seemed to be very new to the field of gender and newly exposed to gender concepts which may require them to have a refresher course in the near future.

The second master class in the programme will be held online on 28th and 29th January and the final one from 10 to 12 February 2021 at TMF’s office in Kinondoni district, Dar es Salaam.